Come October, once its employees are fully vaccinated, consumer durables major Usha International Ltd intends to get a small team up and running out of a co-working centre in
Zirakpur, a satellite town on the outskirts of Chandigarh.

Zirakpur is a strange location to have an office for a Gurugram-headquartered firm such as Usha. “If you want to grow your business, you need to be strategically located. Zirakpur has great connectivity and is close to national highways, and it is part of the (Chandigarh-Panchkula Mohali) tri-city area,” said Manmohan Bhutani, sales administration head, Usha
International.

What is left unstated is a set of new post pandemic realities that have compelled firms to reconsider forgotten geographies. The persisting allure of ‘work from anywhere’, reverse migration of employees to their home towns and cost rationalization have all come together to push many firms to seriously consider a tier-2 strategy in recent months. The essential thrust of this strategy: diversify base locations, open smaller offices, hire local talent where possible and retain those who have relocated to their hometowns. The ‘Bharat’ foray is temporary in some cases. Usha, for instance, plans to rent 50 seats from Awfis, a managed workspace provider, instead of acquiring any new real estate. The Zirakpur base will be the 85-year-old consumer durables firm’s first-ever managed office space.

Property analysts believe that as more firms walk down a similar path, the increased job creation and expansion will create a trickle-down effect in several tier 2 towns, leading to a rise in the overall demand for housing, workspaces and warehouses. This will inevitably bring big town developers to India’s small towns. A recent report on the future of workplaces by the Federation of Indian Chambers of Commerce & Industry (Ficci) and real estate services firm CBRE showed that the expansion of flexible workspaces in small cities, which was largely a tier-1 phenomenon so far, will be demand-led. Driven by the availability of local talent and infrastructure, Kochi, Ahmedabad, Jaipur, Chandigarh, Indore, Lucknow, Coimbatore, Thiruvananthapuram and Nagpur will all see a rise in flex office stock, the report said.

Awfis’ founder and chief executive officer, Amit Ramani, said that in the next 6-18
months, a lot of firms will have some presence in smaller cities, even if the initial requirement is small. “It indicates a strategic shift. Companies want to leverage local talent in the so-called Bharat geographies. The requirement is (from) a broad mix of logistics, new-age fintech and healthtech firms and IT and tech employers too,” Ramani said. Awfis has recently opened a new co-working centre in Ahmedabad. The firm also plans to open workspaces in Indore, Chandigarh and Bhubaneshwar.

If offices shift, demand for new homes will inevitably crop up. Until now, India’s real estate market has been skewed towards just a handful of metros—Mumbai Metropolitan Region, Delhi-NCR, Bengaluru, Chennai and Hyderabad, along with tier-1 cities such as Pune and Kolkata. These seven cities account for about 70% of the overall organized residential market in terms of volume.

This story appeared in the September 02, 2021 issue of  Mint and was originally published at: Small-town real estate gets a pandemic boost (livemint.com) 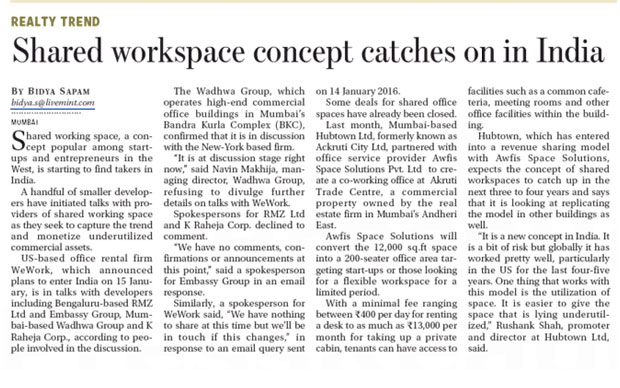 “We are excited to launch shop.https://www.awfis.com/inspiration/wp-content/uploads/2016/06/shutterstock_3835072871.jpg.com in line with Awfis’ vision to be a leading integrated workspace solutions provider. Through this offering, we aspire to continue to cater to the evolving workspace demands of discerning clients, across the spectrum,” said Amit Ramani, Founder & CEO, Awfis. “Most of us today are facing the new reality of hybrid work models and working remotely is now here to stay. Awfis Shop is the first of its kind offering by a co-working player, which combines functionality with convenience to offer both individuals and enterprises with best-in-class products while working remotely.”