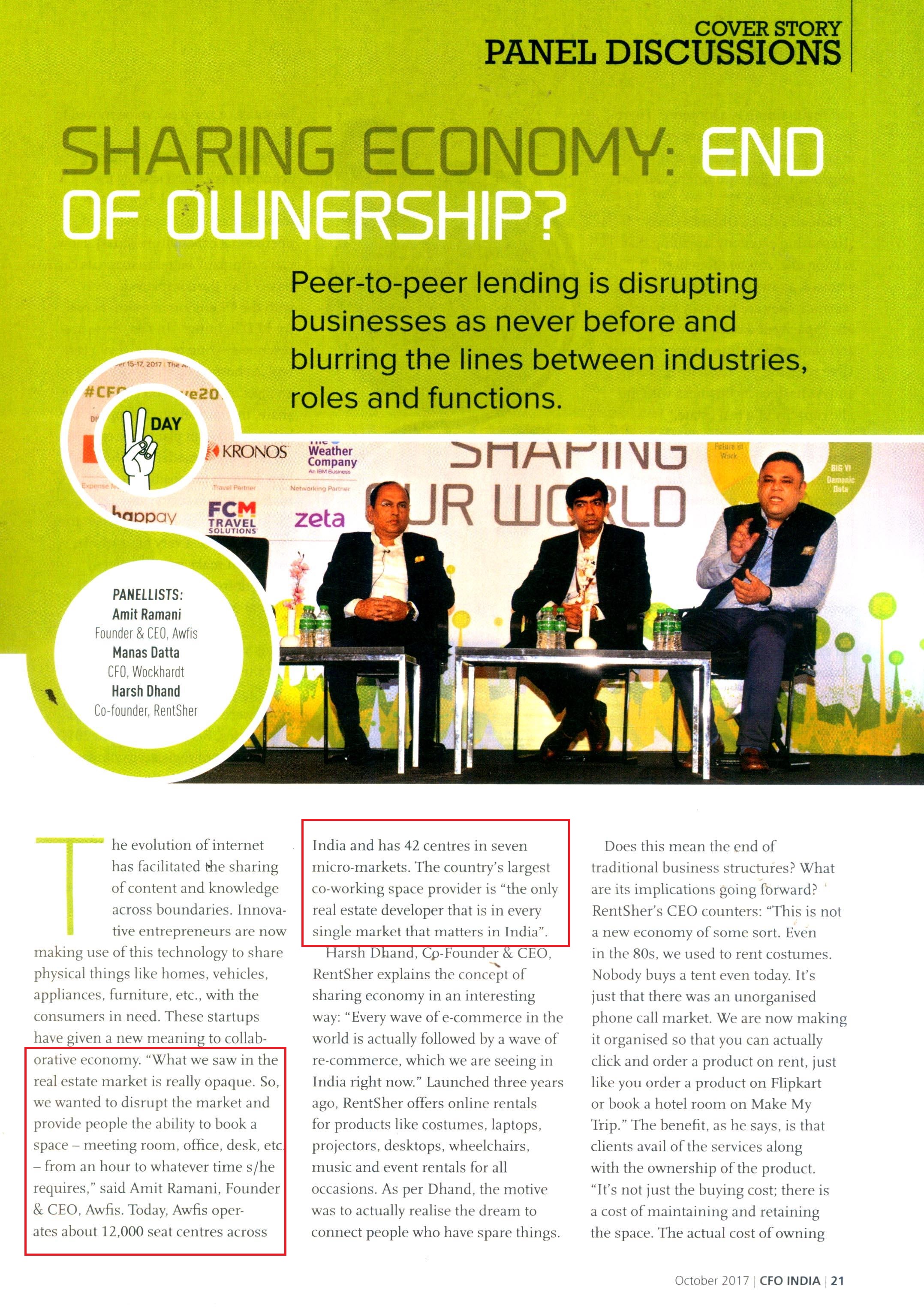 The following article is based on a panel discussion during the annual CFO Conclave held between 15 and 17 September. The panellists were Manas Datta, CFO, Wockhardt; Harsh Dhand, Co-founder, RentSher; and Amit Ramani, Founder & CEO, Awfis.

The evolution of internet has facilitated the sharing of content and knowledge across boundaries. Innova­tive entrepreneurs are now making use of this technology to share physical things like homes, vehicles, appliances, furniture, etc., with the consumers in need. These startups have given a new meaning to collab­orative economy. “What we saw in the real estate market is really opaque. So, we wanted to disrupt the market and provide people the ability to book a space – meeting room, office, desk, etc. – from an hour to whatever time s/he requires,” said Amit Ramani, Founder & CEO, Awfis. Today, Awfis oper­ates about 12,000 seat centres across India and has 42 centres in seven micro-markets. The country’s largest co-working space provider is “the only real estate developer that is in every single market that matters in India”.

Harsh Dhand, Co-Founder & CEO, RentSher explains the concept of sharing economy in an interesting way: “Every wave of e-commerce in the world is actually followed by a wave of re-commerce, which we are seeing in India right now.” Launched three years ago, RentSher offers online rentals for products like costumes, laptops, projectors, desktops, wheelchairs, music and event rentals for all occasions. As per Dhand, the motive was to actually realise the dream to connect people who have spare things.

Does this mean the end of traditional business structures? What are its implications going forward? RentSher’s CEO counters: “This is not a new economy of some sort. Even in the 80s, we used to rent costumes. Nobody buys a tent even today. It’s just that there was an unorganised phone call market. We are now making it organised so that you can actually click and order a product on rent, just like you order a product on Flipkart or book a hotel room on Make My Trip.” The benefit, as he says, is that clients avail of the services along with the ownership of the product. “It’s not just the buying cost; there is a cost of maintaining and retaining the space. The actual cost of owning and maintaining is a lot more. There are companies which have expertise in maintaining, retaining and refurbishing the equipment and you can simply use it.”

Ramani feels that the sharing economy will contribute the most to the overall economy in the years to come, with the millennials in the driving seat. “What’s changed is that today millenials are driving it. Currently, 300 million youths are in the age group of 18-35 years. That’s going to drive the agenda.”

Manas Datta, CFO, Wockhardt cited an example of a healthcare study that states India needs a total of 700,000 beds, if the country aims to provide one bed per 250 people. To create 700,000 beds, it needs a capital of $30 billion. “This is where the shared economy can take us to,” he opined and added: “In our country, if you look at FMCG, pharma, and majority of small scale industries, they are shared. It’s not that we are seeing sharing economy model for the first time.”

Datta explains that earlier there was outsourcing of the capacity, but “the new technology is forcing us to look at the delivery model and not only capacity building. It’s also about delivering at the right time”.

The shared economy will help grow the overall economy in a sustainable way and also support millions of people in a sustainable way, Dhand said. The hospital capacity in India and the US is overflowing. Sometimes patients, who are discharged early, need the fowler cots or the wheelchair at their house till full recovery. “He doesn’t want to buy a fowler’s bed or a wheelchair and rents these things, which can then be used by another patient who is discharged. So, that’s how even with a more complicated system like healthcare, we can actually introduce the sharing economy,” he said, adding, “When I was in Phillips, we used to sell out ECG machines. Now I work with Phillips to get those machines out in the market for camps on a sharing basis.” He suggested that a lot of spare things that are in hospitals or services can be moved to the house for use.

The other aspect of the sharing economy, as Dhand says, is the conversion of capital expenditure (capex) of an organisation to operational expenditure (opex). How can a company better manage its cash flows? Can the company do away with the `5 million investment just for LED lighting? “In fact, there are revenue sharing models. If you can replace normal lighting with LED on an opex model and you can revenue share, that model can be applied for better expansion plans,” he explains.

The sharing model may, however, be a difficult proposition for the manufacturing sector, says Datta. “Sometimes owning a manufacturing capacity can be a very big advantage, which can make you completely different from others.”

What triggered Ramani to launch Awfis? “We saw this (real estate) industry growing. What we saw was that the SME sector was the fastest growing. Between 1947 and 2011, there were only 200,000 registered companies. Between 2011 and 2017, the number of registered companies grew to 1.2 million. So we anticipated in 2015 that this would be the sector that would grow fastest and how do we enable people to find space – where and when they need it? The kind of ‘uberisation’ of the real estate was the motivation and that continues to drive our growth here as well.” The company had 2,500 seats till November last year. The current strength is 12,000. “By same time next year, we will be 40,000,” he says, adding, “By 2022, we will have 250,000 seats, which will make us the single largest landlord, without owning a single piece of real estate.”