Awfis to disrupt workspace across India

Shared workspace provider, Awfis, which is seeing growing investor interest in the co-working space, has drawn up plans for its aggressive growth to tap opportunities both in metros and tier-2 cities. The company plans to focus for next 2-3 years on the domestic opportunities before exploring opportunities in the Asian region (Sri Lanka, Bangladesh and Vietnam) and the Middle East.

Amit Ramani, founder & CEO, Awfis, told Telangana Today, “Our priority is to deepen the penetration in existing markets and enter new cities with focus on tier-II locations. In the next one year, we will strengthen our presence by foraying into cities such as Chennai, Kochi, Indore, Ahmedabad, Peshawar and Jaipur while adding more centres in Chandigarh. We will have at least two centres each in Ahmedabad and Kochi. We want to take our seat capacity from 25,000 to 40,000 in next one year by creating presence in 15 cities.”

The company has recently raised an additional $20 million series C funding from Sequoia India and Innoven Capital and The Three Sisters: Institutional office TTS:IO led by Radha Kapoor Khanna. Sequoia Capital has also invested $20 million earlier in Awfis as part of Series B funding. Awfis was jointly incubated by Amit Ramani and The Three Sisters: Institutional Office (TTS:IO) with a total capital investment of $11 million in April 2015.

Ramani added, “With the growing demand for co-working spaces, there is a focus on transforming under-utilised real estate assets and providing affordable work spaces for entrepreneurs. The additional capital will aid us in expanding our footprint in India with over 100 centres with more than 40,000 seats in the next one year. For us, access to capital had been smooth so far.”

On the competition in the segment, Ramani explained, “Crowding is happening now, but very soon, it will prove that only few quality players will survive, sustain and achieve profitability. Other players may remain either boutique or regional players. Only 4-5 large players will emerge at the end.”

Growing footprint
Awfis last fiscal scaled up to 25,000 seats across 55 centres with a member base of over 15,000 as compared to 5,800 seats in 20 centres with a member base of just over 4,000 in July 2017. Awfis today serves over 1,200 companies ranging from startups/MSMEs to Fortune 500 companies, forming the largest co-working community in India. The company counts among its clientele companies such as Hinduja, Vodafone, Mercedes Benz, RBI, Hitachi, ShareKhan, Zomato, Practo operating from various Awfis centres.

Awfis has inked lease deals totalling to 0.25m sq ft in the last two months across Hyderabad, Kolkata, Chandigarh and Noida. The company currently has a total footprint of 1.5 million sq ft across all existing markets in India. Awfis has a nation-wide network of 55 centres across nine cities and 45 micro markets.

Apart from its own proprietary centres, Awfis has been focusing on an asset light ‘managed aggregation’ model-partnering with space owners who have unused commercial space and transforming them into suitable workspaces.

He informed, “Future growth for Awfis is driven via this model and the company intends to maintain 60 per cent of inventory under the managed aggregation model and 40 per cent under Straight Lease model. We are also aggregating underutilised spaces in hotels and malls and converting them into shared workspaces. We are already covering around 7,000-8,000 sq ft under this model. This will remain our core strategy in future as well, accounting for a bulk of our activity.”

Awfis has also formed over 100 strategic partnerships that provide its community members seamless access to service providers in the areas of accounting, legal, recruitment, payments, web services, mail management, healthcare and insurance, making it a one-stop-shop for all requirements.

Hyderabad market
Talking about the prospects of Hyderabad, Ramani said, “The city is witnessing adequate growth. We have recently created large workspace in Raidurg. We anticipate that the city will remain one of the biggest places for this market place. In future, we will spread our presence in Secunderabad, Begumpet and the Financial District.”

The company has tied up with partners to launch workspaces in Raidurg and HITEC City recently under its managed aggregation model. 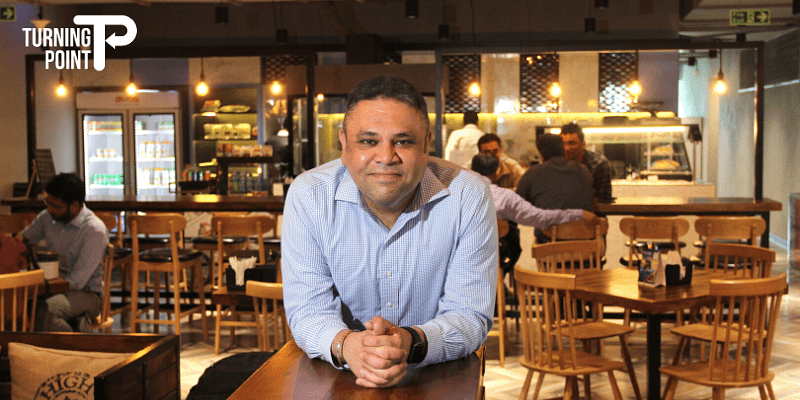 Awfis to double footprint in Hyderabad

The company today has centres in places such as HITEC City, Kondapur, Financial District, Gachibowli, Begumpet, Ameerpet and Banjara Hills.

Amit Ramani, founder & CEO, Awfis told Telangana Today in an exclusive interview, “Hyderabad is a critical market for Awfis’ growth and substantial investments have gone into this direction. We plan to double our centres from the current 12. We expect an overall investment of about $7 million (over Rs 50 crore) towards new centres in the city.”

The company has just reached its 100-centre milestone nationally, by opening a new centre in Bengaluru. Further to this expansion, Awfis is now spread across 4 million sq ft pan-India with over 62,000 seats across 14 cities, making it the largest flex workspace provider in India.

“We are optimistic about the growth of the flex workspace industry this year and in line with that our aim is to double our capacity further in 2022 by launching our next 100 centres and entering new markets to establish a strong presence across 18 cities in India,” he added.

Each of the existing 100 centres have been set up to suit the requirements of large-scale enterprises, amidst the new normal. Awfis’ fully tech-enabled workspace solutions platform covers the entire spectrum of workspace needs, right from work-from-home to work-near-home and hybrid work requirements.

Ramani added, “Over the course of the pandemic, Awfis has grown from being a coworking player to an integrated end-to-end workspace solutions provider that is changing the way India works.”

This story appeared in the 20  January, 2022 issue of Telangana Today and was originally published  at : Awfis to double footprint in Hyderabad (telanganatoday.com)

Occupancy levels in co-working spaces across the country were hit in March and April, and from May onwards some recovery has begun with the occupancy improving from 15-20 per cent to about 50-70 per cent level depending on the city. Many of those who had to work from home and didn’t have required infrastructure have started looking at ‘working near home’.

Sharing the emerging trends in the last few months, Awfis founder & CEO Amit Ramani told Telangana Today, “We are clearly seeing a new trend where corporates are looking at a distributed network of co-working spaces in each city so that employees can operate from spaces within their vicinity, instead of making them commute to one major centralised commercial location.”

And another trend is that some level of re-densification is happening within the co-working spaces to ensure social distancing to meet the safety norms and expectations in the coming 3-6 months. Common areas, cafes and pantries will be avoided for some time to ensure safety. Since the occupancy levels are low in co-working spaces now, social distancing is not an immediate challenge now, but will become crucial when footfalls will increase.

However, in terms of occupancy, co-working space providers which were largely dependent on the startups and freelancers were impacted more after the pandemic outbreak, while those who largely catered to large enterprises saw stable activity.

Co-working space provider Awfis is reaching up to 80 per cent of its pre-covid sales levels, as those who were operating in conventional office spaces whose renewals were due have started moving to flex or co-working spaces.

Ramani said that technology will play a big role in these times. Awfis, for instance, has rolled out an app even before Covid that allows co-working space occupants to have a seamless experience for booking meeting rooms and access other areas.

And for those employees or independent professionals who were required to work from home, the company recently launched Awfis@Home, providing smart furniture, seamless connectivity and an integrated tech enablement platform on subscription and one-time payment mode.

When asked if a dip in the hospitality business which is impacted by lockdown is leading to new opportunities, Ramani said, “We have been creating spaces in hotels and retail mall spaces. We are seeing many deals in this segment with several large brands and Awfis is currently in the process of finalising deal structures. Hotels are keen to turn their banquets (2,000-10,000 sq ft space) into co-working spaces. This is a huge opportunity.”

This story appeared in the 12 September , 2020 issue of Telangana Today and was originally published  at : Distributed network to drive co-working space growth (telanganatoday.com) 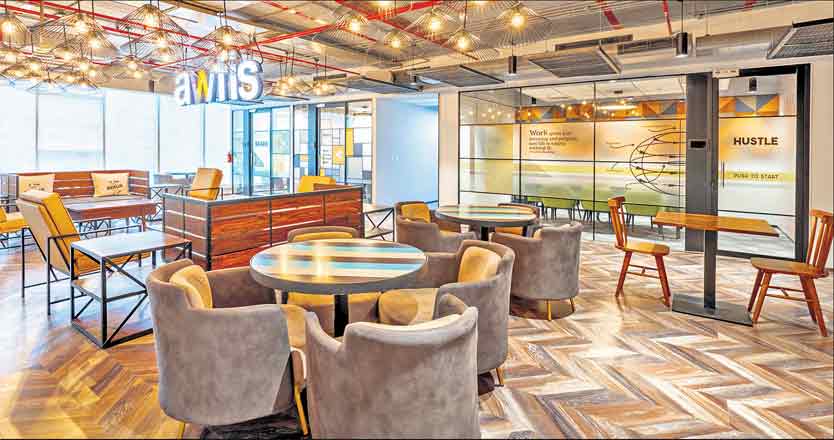 Awfis to double operations in Hyderabad

Hyderabad: Co-working space company, Awfis Space Solutions, which operates eight centres in Hyderabad with a capacity of 5,000 seats, is planning for an expansion in the next six months.

Sharing the growth plans for Hyderabad market, Amit Ramani, founder & CEO, Awfis Space Solutions, told Telangana Today, “We have roughly 5,000 live seats and plan to double it to 10,000 seats in the next six months. Hyderabad is a key market for us and it will be among the top three cities for us as a co-working player, including Bengaluru and Pune.”

“Hyderabad is on our high priority list and we are keen to double the capacity here from eight centres to close to 16 centres by June-July 2020. We are currently in HITEC City and Gachibowli and plan to expand into Banjara Hills, Jubilee Hills, Begumpet, Ameerpet and Secunderabad. From a geographic point of view, we want to provide complete coverage across commercial micro-markets of Hyderabad. At present, the concentration is on the western market, but we are soon going to spread into other locations,” Ramani added.

“Nationally, we have 35,000 seats that are live across 10 cities (including Hyderabad). We have recently entered into Chennai. There are around 15,000 seats that are underway, which will be ready by June. We are going to enter into Kochi, Indore and Ahmedabad. The goal is to be in 12-13 cities and have over 50,000 live seats by the middle of the year. We currently have 70 centres pan-India, and will be adding another 30 to take the total to 100 by then.”

Talking of the co-working demand in India, he said, small and medium businesses and enterprises dominate the co-working space occupancy at about 90 per cent. These users are going to dominate the segment and drive demand. Enterprises today look at converting capital investment into operational investment, flexibility with shorter lock-in period, better infrastructure and well-designed workspaces.

Also, Awfis is able to provide service quality and delivery experience that these companies are looking for, by providing the expected engagement and convenience. The company is increasingly bringing in customisation through its offerings.

“We continue to focus on using technology and improving customer experience. Our workspace management helps companies with seamless access and digital management systems. There is a big role that technology will play in work space management in future, in the form of energy management tools and using grid power to keep the operational costs low. Data analytics will help in giving better learning and understanding about customers on what will work and what will not,” Ramani explained.

People are also looking at mobility as a big solution. Awfis is creating 100 centres soon pan-India, which will improve the operational convenience to customers for their nationwide operations. The company is looking to provide different formats for users providing varied price points, from Rs 10,000 to Rs 25,000 per seat, depending on the building, where co-working spaces are being created.

This article was originally published 5th February 2020, on at: Awfis to double operations in Hyderabad (telanganatoday.com)