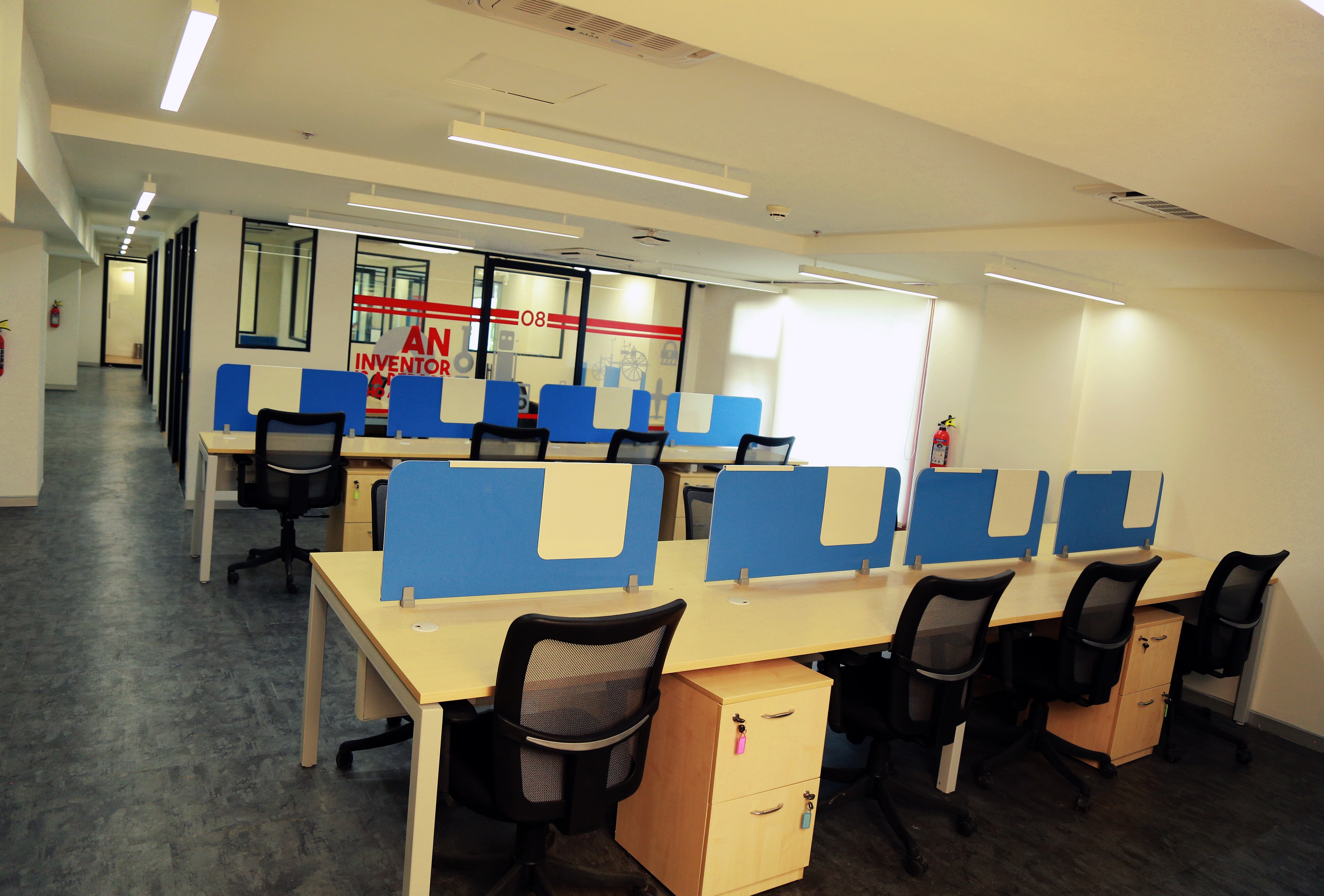 AWFIS sets up centre in Hyderabad

One of the largest co-working space AWFIS space solutions has made its foray into Hyderabad with its new centre in Taj Deccan hotel. The new centre can house about 200 workstations, one meeting room and two meeting lounges and is 18th such centre in the country by the company.

The company, that had raised about Rs 72 crore ($11 million) through internal funding, is now looking at raising about Rs 100 crore in the next three to six months so as to reach the target of having 30,000 seats by March 2018.

Started in April 2015, AWFIS has grown to be a 4,500 seat company currently and expects to offer 6,000 seats by June 2017. And this will happen through expansion to cities like Hyderabad, Pune and Chennai in the next one year or so.

Speaking about the centre in Hyderabad, Amit Ramani, Founder and CEO, AWFIS said, “This is our latest addition to the expansion plan in the south and we are delighted to have partnered with leading hospitality brand TAJ GVK. Our new centre sits in the lap of luxury in Hyderabad at Banjara Hills offering fully equipped, ready to use work spaces which can be booked just in time through the Awfis mobile app.”

“With the launch of the new Pro-working Centre at TAJ Deccan, AWFIS will set a new benchmark of converting underutilized spaces in premium properties for the benefit of the startup community looking for affordable yet premium addresses for setting up office,” said Sumit Lakhani, Marketing Head, AWFIS Space Solutions.

(This Awfis coverage was published by Telangana Today under the headline “Awfis sets up centre in Hyderabad” on March 10, 2017. You can read the full story here: http://telanganatoday.news/awfis-sets-centre-hyderabad )

Co-working spaces are coming up in luxury hotels, thus changing the way office feels and looks

If you thought co-working spaces was all about having a few workstations with a coffee machine and free Wi-Fi, then the new-age facilities will make you think again. Co-working spaces are changing the way they function and are finding good companionship in five-star hotels and malls. Whether it is Awfis which has set up a centre in Taj Deccan in Banjara Hills or The Park, Somajiguda having multiple office spaces set up in their hotel, Hyderabad’s co-working space is moving with the changing trends.

“Co-working spaces in five-star hotels and malls provide an ecosystem to just the provider but also to the user. It has benefits like 24/7 operational facility, ample parking, entertainment, food and shopping areas. Along with this a five-star hotel also has the added advantage for business travelers in terms of stay. In addition, for service providers like ours, these spaces prove to be more efficient in the sense we don’t have to worry about security and maintenance,” says Monika Misra, co-founder, iKeva – a Hyderabad-based co-working infrastructure provider.

The company has one of its Mumbai co-working spaces set up in a mall which provides them with benefits like parking and other amenities. These kind of co-working spaces also prove beneficial for hotel and mall owners as they lead to revenue generation and also help in utilising space better. For the co-working space provider as well, the burden of maintaining the space is shifted and they can concentrate more on providing better amenities inside the space. Most of these spaces have also built-in conference rooms and meeting rooms along with access to food, entertainment and other amenities.

Hotels and Restaurants Association of Telangana, secretary general, Pradeep Kumar Dutt said, “This is a very positive trend as it helps not only the co-working space provider but also the hotels to increase their occupancy rate. So in that sense it is a dual benefit for both service providers – in this case co-working infrastructure providers – and space providers – which are hotels. With many five-star hotels not having business round-the-clock, this kind of provision helps them in having regular business.”

Visit the below link to read the published article: https://telanganatoday.com/five-star-hotels-new-work-stations

Awfis to double capacity in Hyderabad

Awfis, India’s largest co-working space provider, which operates seven centres in Hyderabad with 4,300 seats is aiming to double the capacity to 8,000 seats within next 9 months to one year.

Amit Ramani, CEO & founder, Awfis, told Telangana Today, “We are seeing a mixed portfolio of clients that include IT and ITeS, large and medium enterprises, startups and freelancers in Hyderabad. Other metro cities also present a similar mix.”

In Hyderabad, the company has centres in Hitec City, Gachibowli and Taj Deccan and is planning to expand its presence in existing locations as well as foray into the Financial District, Banjara Hills and Secunderabad in future. It will also expand to other major towns in Telangana within next nine months.
There is a significant infrastructure that Telangana is seeing which will attract many companies to the State and co-working space demand will also grow parallelly. India is expecting a healthy absorption rate at 15 million sq ft in 2018 and is expecting 32 million sq ft next year. And Hyderabad is currently among the top seven cities that is driving this growth.

Pan-India expansion
He added, “We plans to establish over 100 centres with more than 50,000 seats in the next 10-12 months with 70 per cent of the expansion happening in tier I cities. We will grow deep in existing markets of Mumbai, NCR, Bengaluru, Chennai, Hyderabad, Kolkata and Pune. By 2020, we are looking at expanding to more than 1 lakh seats with larger portion coming from top seven cities with 50-75 centres in Mumbai, Delhi NCR, Bengaluru. Currently, each of these cities have around 10-12 centres each.”

Awfis plans to enter tier II cities such as Jaipur, Chandigarh, Ahmedabad, Bhubaneshwar, Kochi and Indore. It has a total footprint of 1.5 mn sq ft across all its existing markets.

Awfis expanded from 5,800 desks across 20 centres in July 2017 to 25,000 seats across 55 centres now indicating massive opportunity this space presents and the growth that Awfis has undertaken. It is aggregating commercial spaces in hotels and malls and converting them into shared workspaces. The company serves over 1,300 companies, of which revenue from SMES account for 40 per cent, corporates 40 per cent and 20 per cent from startups and freelancers.

He points out, “Freelancer segment though small at present is picking up fast. They are looking for flexible workspace, convenient location and gigabyte connection.

As per reports, the industry will reach a valuation of $2.2bn by 2022 which sets the tone for a changing shift in working trends of the entire commercial real estate sector in India.

Visit the below link to read the published article:

Awfis to double capacity in Hyderabad

Awfis to disrupt workspace across India

Shared workspace provider, Awfis, which is seeing growing investor interest in the co-working space, has drawn up plans for its aggressive growth to tap opportunities both in metros and tier-2 cities. The company plans to focus for next 2-3 years on the domestic opportunities before exploring opportunities in the Asian region (Sri Lanka, Bangladesh and Vietnam) and the Middle East.

Amit Ramani, founder & CEO, Awfis, told Telangana Today, “Our priority is to deepen the penetration in existing markets and enter new cities with focus on tier-II locations. In the next one year, we will strengthen our presence by foraying into cities such as Chennai, Kochi, Indore, Ahmedabad, Peshawar and Jaipur while adding more centres in Chandigarh. We will have at least two centres each in Ahmedabad and Kochi. We want to take our seat capacity from 25,000 to 40,000 in next one year by creating presence in 15 cities.”

The company has recently raised an additional $20 million series C funding from Sequoia India and Innoven Capital and The Three Sisters: Institutional office TTS:IO led by Radha Kapoor Khanna. Sequoia Capital has also invested $20 million earlier in Awfis as part of Series B funding. Awfis was jointly incubated by Amit Ramani and The Three Sisters: Institutional Office (TTS:IO) with a total capital investment of $11 million in April 2015.

Ramani added, “With the growing demand for co-working spaces, there is a focus on transforming under-utilised real estate assets and providing affordable work spaces for entrepreneurs. The additional capital will aid us in expanding our footprint in India with over 100 centres with more than 40,000 seats in the next one year. For us, access to capital had been smooth so far.”

On the competition in the segment, Ramani explained, “Crowding is happening now, but very soon, it will prove that only few quality players will survive, sustain and achieve profitability. Other players may remain either boutique or regional players. Only 4-5 large players will emerge at the end.”

Growing footprint
Awfis last fiscal scaled up to 25,000 seats across 55 centres with a member base of over 15,000 as compared to 5,800 seats in 20 centres with a member base of just over 4,000 in July 2017. Awfis today serves over 1,200 companies ranging from startups/MSMEs to Fortune 500 companies, forming the largest co-working community in India. The company counts among its clientele companies such as Hinduja, Vodafone, Mercedes Benz, RBI, Hitachi, ShareKhan, Zomato, Practo operating from various Awfis centres.

Awfis has inked lease deals totalling to 0.25m sq ft in the last two months across Hyderabad, Kolkata, Chandigarh and Noida. The company currently has a total footprint of 1.5 million sq ft across all existing markets in India. Awfis has a nation-wide network of 55 centres across nine cities and 45 micro markets.

Apart from its own proprietary centres, Awfis has been focusing on an asset light ‘managed aggregation’ model-partnering with space owners who have unused commercial space and transforming them into suitable workspaces.

He informed, “Future growth for Awfis is driven via this model and the company intends to maintain 60 per cent of inventory under the managed aggregation model and 40 per cent under Straight Lease model. We are also aggregating underutilised spaces in hotels and malls and converting them into shared workspaces. We are already covering around 7,000-8,000 sq ft under this model. This will remain our core strategy in future as well, accounting for a bulk of our activity.”

Awfis has also formed over 100 strategic partnerships that provide its community members seamless access to service providers in the areas of accounting, legal, recruitment, payments, web services, mail management, healthcare and insurance, making it a one-stop-shop for all requirements.

Hyderabad market
Talking about the prospects of Hyderabad, Ramani said, “The city is witnessing adequate growth. We have recently created large workspace in Raidurg. We anticipate that the city will remain one of the biggest places for this market place. In future, we will spread our presence in Secunderabad, Begumpet and the Financial District.”

The company has tied up with partners to launch workspaces in Raidurg and HITEC City recently under its managed aggregation model.